Lots of small project updates this week! I had one open project going into this week, and started working on one new one:

Plus, I did a few streams on Twitch! Nothing crazy, but I’m hoping to continue to turn the camera on whenever I’m tinkering. Follow me on Twitch to get notified when I go live!

No code changes to this project- instead, V2 focused on hardware functionality (read: drilling better holes). 3 things got changed up in this iteration. If you’d like to see what I did in V1, check out my previous post.

I’m pretty happy with how everything has turned out so far! Battery life continues to be a pain- I’m only getting a few days out of a charge. I’ve got a few ideas for V3 already, and using BLE (Bluetooth Low Energy) to decrease that power draw is on the radar.

I picked up this spool of LEDs on Amazon a while back and I’ve been waiting for an excuse to play with it. A lazy Saturday seemed like the perfect reason! 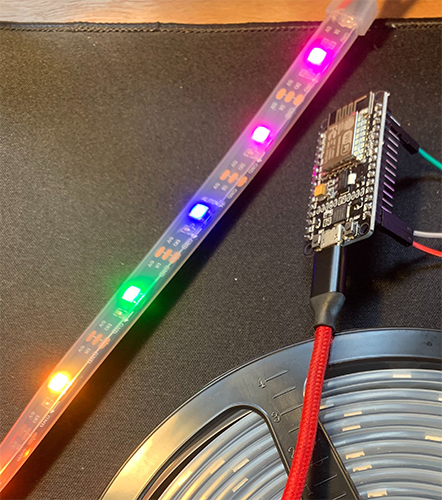 Turns out, the FastLED library makes addressable LED strips incredibly easy. It supports a bunch of different LED chipsets, including what I’ve got- the WS2812B.

After doing some simple tests, I set out to recreate the Philips Hue LightStrip- that meant hooking up the ESP8266 to AWS IoT so I could control them from an external source. Figuring out how to get the x.509 certificates loaded into the ESP8266 took a bit longer than I thought, so I called it a night once I was able to do some basic switching through AWS IoT. I still need to clean up the code a bit before I can publish it to GitHub- hardcoded credentials and spaghetti code everywhere.

That’s what I’ve knocked out this week! Next week I’m hoping to continue build out the lights- I’d like to use AWS Thing Shadows to manage state for the lights, and then build out a simple color picker app that will allow me to set the lights from a browser.

Looking forward to the next projects! Cheers!